Posted on August 1, 2013 by john in Fishing Tips | Comments Off on Forgotten Fishery

In between all of the lobster madness that sweeps the Lower Keys there is a fishery that seems to be forgotten during the peak of the year.   Fishing for bonefish on lower keys flats has a lot to offer for an ADD afflicted angler such as myself.   Of course I find it better to not fight the lobster crowds for undisturbed flats space and to just join in on the quest for a crustacean dinner.  However the madness calms down after the first few days of season and the flats are fishable for the rest of the month. 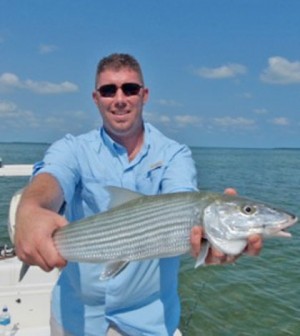 The best time to find and catch bonefish has to be August.  The inshore quest for tarpon has faded for another year and the reef and offshore fishing has passed its peak but the bonefish are scouring the flats for the tasty morsels that make up their diet.  The winds tend to be down and that is great when looking for the elusive grey ghost.  The odds of seeing a bonefish tailing or just pushing water as they forage on the flats is greatly increased when it is calm.  Clear skies are also a great help, however neither is absolutely necessary to find fish.  Both calm and clear are preferable however fish can be easily found if you have either of those conditions available.  If you are missing both you certainly have your work cut out for you.

Bonefish do not care for temperature extremes and can move off of the flats during the warmest part of the day.  That doesn’t mean that you stop looking it just means that you want to look in areas that have cooler water flooding the flats from the channels that are a little more temperature stable.  The edges of the gulf are also a little more temperature stable than the middle of a dark grass flat.  You should also remember that the darker the bottom the more light it will absorb and the warmer it will get.  There are also other fish that don’t seem to mind the heat of the day.   Both sharks and permit are found on the flats whenever there is enough water to cover their backs.

Of course with my fishing ADD I like to be prepared to pursue any and all comers that I might run across.  Unless I have a purist on board who insists on avoiding the live bait scene all together or of course fly fishing enthusiasts. I like to have three rods at the ready to cover 99% of the fish that I might run across.  I usually keep three rods at the ready.  Each rod has a different bait, a shrimp, crab and a pinfish.  The shrimp is on a fluorocarbon leader and is intended for bonefish, bonnet sharks, jacks, and the occasional red fish and snapper.  The crab, also on a twenty pound fluorocarbon leader, is held in reserve for permit.   Finally the pinfish on a Nickel-Titanium leader by Knot 2 Kinky because it is knottable and highly kink resistant. This leader is ready for the more toothy sharks, like the lemon and black tip sharks and also barracuda. 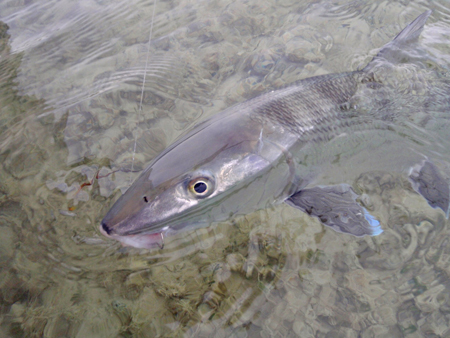 For the non ADD crowd who can concentrate on one species at a time, your deck can remain a lot less cluttered by keeping the one rod that is baited and ready to go in the anglers hand.

This time of year the bonefish also respond well to chumming.  Find a spot on a light colored flat that has a good flow of water coming out of a channel and stake out.  Then keep throwing bits of shrimp into the water and wait for the bonefish to come to you. Remember that you are trying to attract the fish not feed them so make sure to make your bits as small as possible.  This might not be the purist form of fishing for bonefish however if you are still trying for your first fish, this can jump start you on the road to success by showing you what to look for when the fish are at their easiest to see.